Channelling the humorous, hand-painted illustrations for which he’s known, artist David Shrigley has created two limited-edition suitcases for Globe-Trotter this season. Here he tells us about his playful designs and why they demand you travel in style.

David, tell us about the suitcases you’ve created for Globe-Trotter.

One of the things I like most about these designs is that they really are just the wrong colour. Cream feels really decadent for luggage because it’s totally impractical – you’re really making a statement. And if you make the conscious decision to buy quite an impractical piece of art luggage, you’re going to be travelling by private jet or yacht – cream isn’t for commercial airlines. I got to design every part of the luggage from the Globe-Trotter template, which meant picking colour and texture. Then I chose the statements: one is about luggage itself as a metaphor, the other is more oblique. As for their wording? I’m interested in metaphors and oblique statements, onto which you’re invited to project your own meaning. My designs aren’t crossword puzzles where there is just one solution – as the context changes, so does the significance.

Why did you decide to collaborate with Globe-Trotter?

I get asked to work with a lot of brands, but I only tend to work with the ones that seem the most interesting. Globe-Trotter has a really interesting take on luggage, and a lot of what it does is limited edition, which appeals to me as an artist as what I do is inevitably unique or small in number, too. 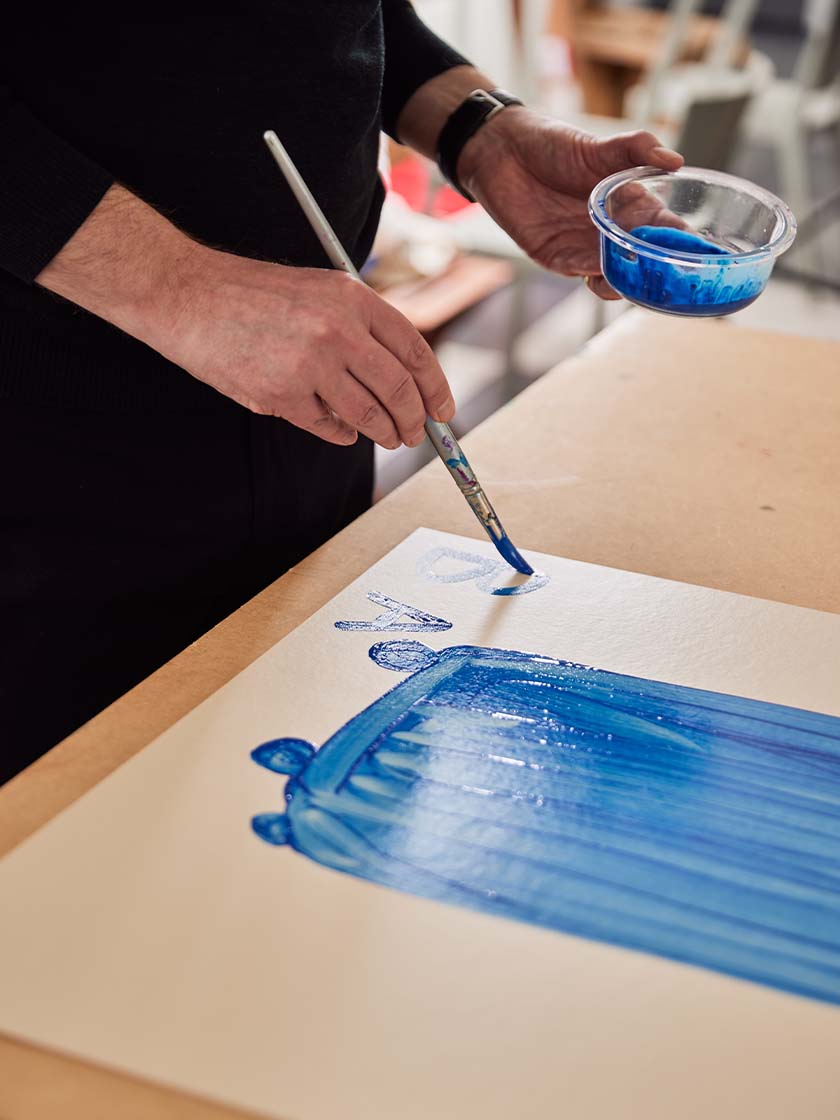 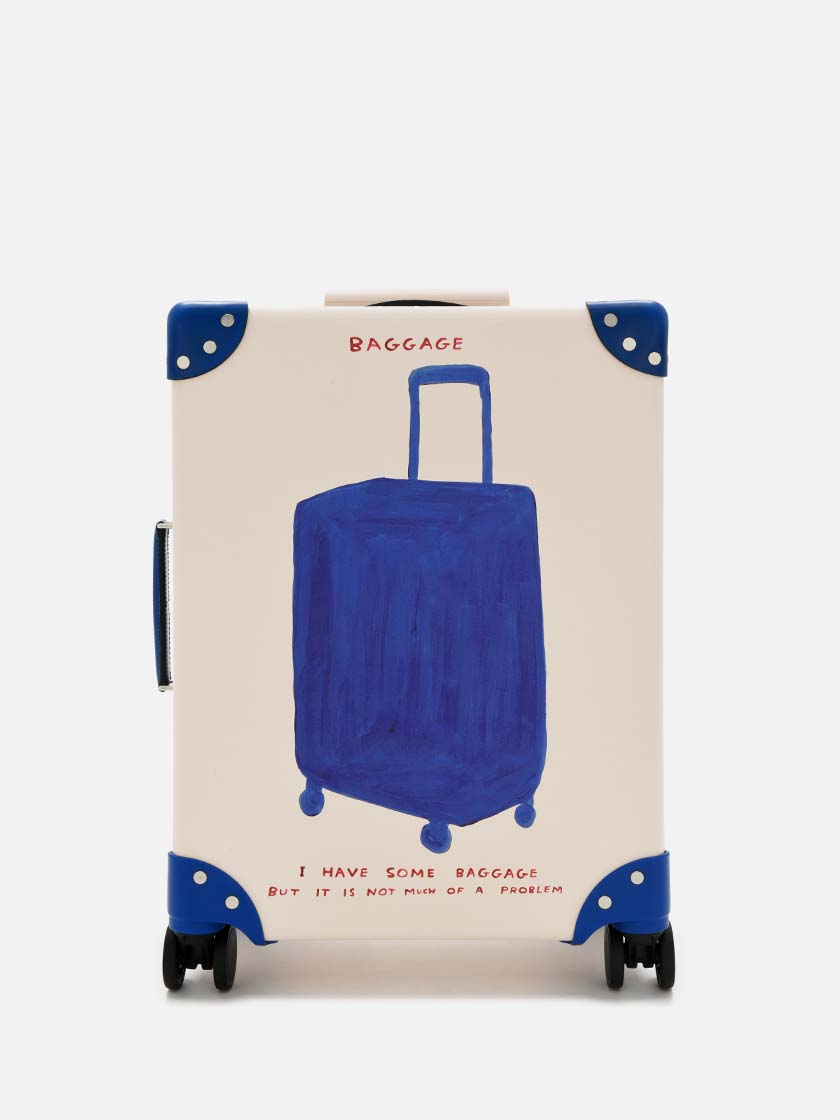 It’s very chi-chi, fancy luggage. When I brought it home and compared it with the suitcases in my spare room, which are old hardshell ones covered in airport stickers, it made me realise that, luggage-wise, I’ve arrived.

What is always in your luggage?

Medication. My way of dealing with my general anxiety about life is to carry all sorts of medication with me, even though I don’t actually take any of it. So I pack heartburn tablets (even though I’ve never had heartburn)… you get the picture.

I’m very organised and I tend to have a routine. Historically, I’ve travelled a lot, so I’ve had three sizes of luggage – one for overnight, one for three days, and one for longer trips. Everything in it serves a purpose, and I tend to be really minimal. My partner, on the other hand, is a really disorganised, terrible travelling companion who always overpacks and even brings an iron. Somehow, we’re still married. 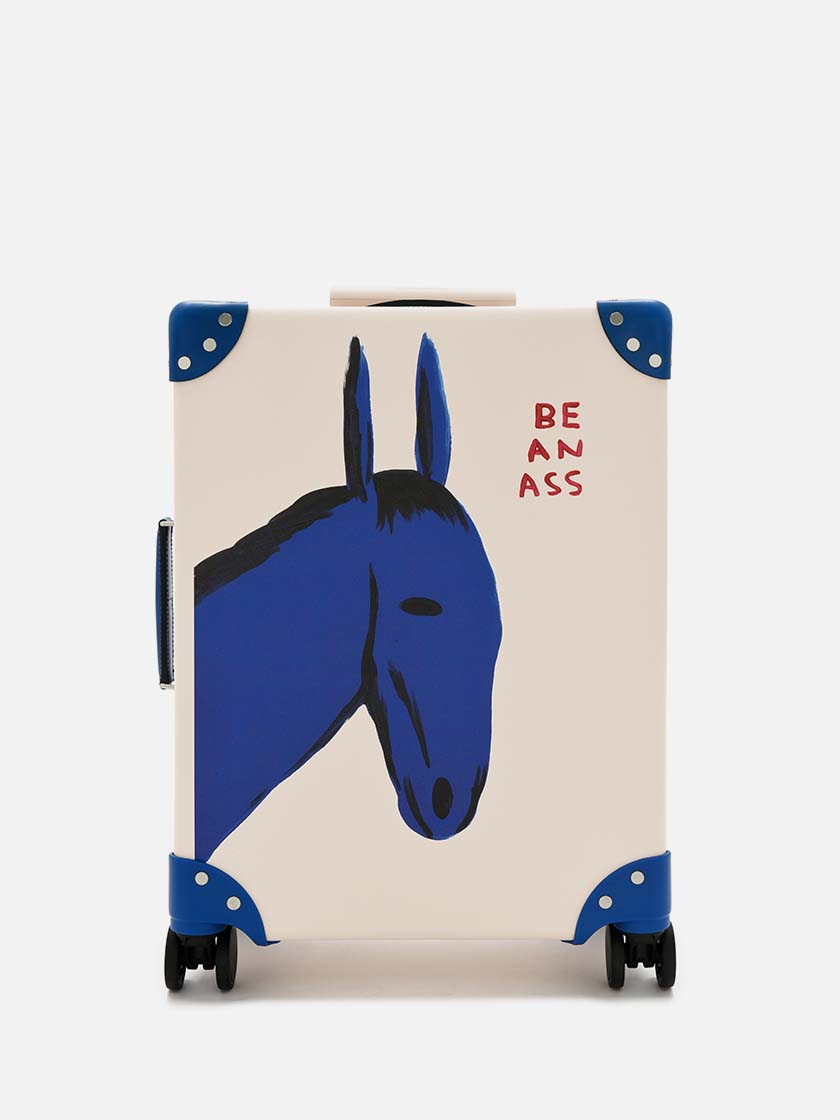 It sounds like you’re on the move a lot. What is your dream destination?

San Francisco. It’s probably the only city in the US I would want to live in. It’s kind of a hippy town, but in a good way, and the standard of dining there is so high. It’s just a really interesting place to visit.

That would be at Noma in Copenhagen. There are all sorts of food experiences in life – some of them are very simple, like cooking with friends or having chips on the beach. But if you’re looking for a performative dining experience, there’s nowhere like Noma. After all, it’s been called the best restaurant in the world for a reason. I’ve since stopped eating meat, but the dish I’ll never forget was a dessert – pork rind covered in berries and chocolate. It sounds a bit gross, but it was incredible and, unlike a lot of food in Michelin-starred restaurants, actually delicious.

Where are you off to next?

Again, Copenhagen. Before lockdown, I would visit two or three times a year. It’s one of my favourite places and the city I visit the most. I’m actually off there again next month because I have a shop there, called the Shrig Shop, which is meant to channel Keith Haring’s Pop Shop in New York in the 1980s. Everything it sells has been designed remotely – I’ve never actually visited the shop – so I thought the time had come to finally see it for myself.

The Globe-Trotter x David Shrigley collection launches on 17 June and will be available online and in store. Prices start from £2,495.

Which Globe-Trotter Is Right For You?

Behind The Lens with Greg Williams