When embroidered initials or a special colour combination don’t quite cut the mustard, choose ‘Super Bespoke’ – the ultimate tailor-made experience that allows customers to create anything their heart desires.

WHAT IS SUPER BESPOKE?

Globe-Trotter’s bespoke service is well established, allowing customers to choose special colours, finishes, lining and initialing for their case. But what if a client requests a case with an extra compartment for a treasured pair of shoes, or lined with a significant piece of fabric? What if, instead of clothes, a client would like to use their Globe-Trotter to cart around a beloved vintage camera with all its additional attachments? That is where our Super Bespoke service comes in. Super Bespoke is the highest tier of the tailor-made service, where the rule book is essentially ripped up and a customer’s imagination is allowed to run wild.

A FASHIONABLE LOOK AT THE PAST

You would be forgiven for assuming that Super Bespoke is a modern concept, but some of Globe-Trotter’s earliest custom creations are prime examples of ambitious and extravagant design. At the turn of the century, travelling was the preserve of the elite and cases needed to accommodate far more lavish (and bulky) wardrobe essentials. The suitcase as it’s known today didn’t really come into use until the end of the 19th century, and was designed quite literally as a ‘suit case’, with internal and additional compartments to carry shirts and hats. In 1912, Globe-Trotter created separate gents and ladies hat boxes, specially designed to protect formal headwear from damage when travelling, as well as the colossal ‘Stabilist’ trunk – which opened as a fully-functional mobile wardrobe. The Stabilist bears a striking resemblance to the 2015 Chivas Regal 12 ‘Made for Gentleman’ trunk. Globe-Trotter built this one-off case with a mini bar – exclusively designed for serving Chivas Regal Scotch whisky – as well as compartments for shoes, a watch drawer and leather-covered suit hangers.

Archive adverts from the 1930s and 1950s indicate the popularity of Globe-Trotter cases with internal storage space before the now ubiquitous compartment-free interior took over. In 2019, British shoemaker Edward Green enlisted the services of Globe-Trotter to create a vintage-inspired shoe compartment case, while Charlotte Olympia added her signature leopard-print twist to a limited-edition series of shoe cases in 2017. 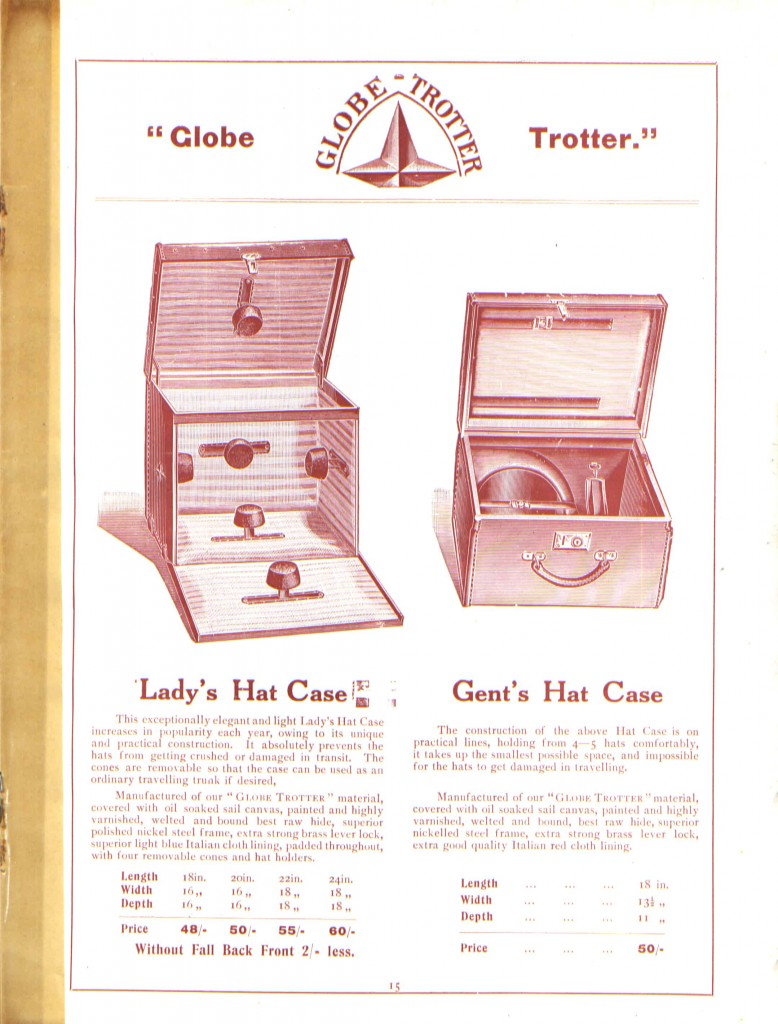 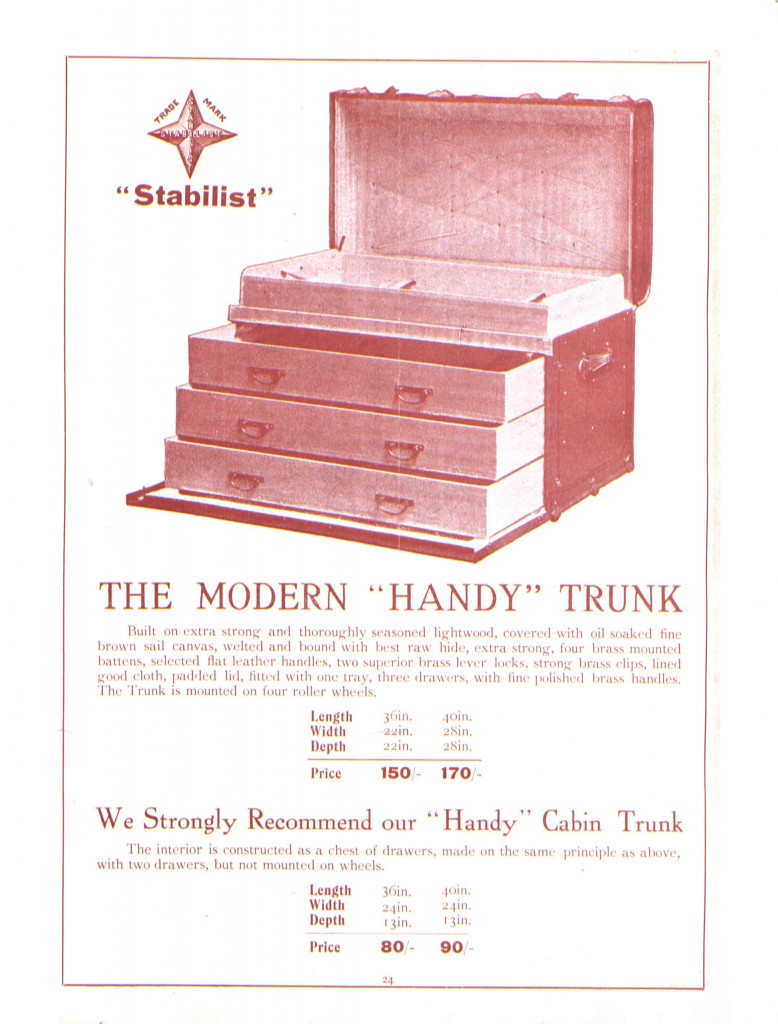 Perhaps the modern equivalent to these historic mobile wardrobes is the vanity case. A perennial favourite, Globe-Trotter vanity cases are released in new colours and styles every season. Traditionally, they are used to carry make-up, jewellery and accessories separately to the rest of your luggage. Sometimes these pieces of kit also require the Super Bespoke service. When a VIP Japanese Globe-Trotter customer was searching for a jewellery case, she found that – before Globe-Trotter stepped in – nothing else matched what she was searching for ‘in terms of the look, price and storage capacity’. In June 2018, she had her Super Bespoke jewellery case built in the UK, a service she described as ‘a dream come true’ as it allowed her to ‘create something completely original’, which she ‘put a lot of time and thought into’. She added: ‘It made me think how wonderful the world would be if it was filled with special objects which people think carefully over and I would love more people to know about the bespoke service.’ Attachment to beautiful objects is something everyone can relate to – and customers often require ways of transporting those items in something of equal sentimental value. In 2018, British potter Steve Harrison took his tea obsession to the next level by commissioning Globe-Trotter to produce a special carry case for his delicate, handmade teapots and cups. In the same year, Globe-Trotter made The Listening Station in collaboration with The Analogue Foundation. This one-off portable trunk featured a built-in record player and high-quality audio from Audio Technica – in addition to built-in storage for records and a mini bar – allowing the listener to indulge in their passion for vinyl armed with their favourite tipple. Most recently, Globe-Trotter pushed technical capabilities by making a one-off ski case for luxury travel agent Leo Trippi, while contemporary design duo Lanzavecchia & Wai went one step further with their multicoloured concertina case commissioned by Wallpaper* magazine. More akin to an art installation than a suitcase, The Things I Love is a creative homage to the universal appeal of travel and collecting special objects from all over the world. Who else but Globe-Trotter could understand the appeal of such a contraption and have the skills and expertise to pull it off in style? Hong Kong-based Globe-Trotter customer and luxury watch fanatic ‘Mr. C9.99’ tells us about his Super Bespoke experience When were you first introduced to Globe-Trotter and what do you like about the brand?

My first encounter of the Globe-Trotter brand was through a poster I saw many years ago, of the famous elephant test. It really caught my eye and stayed with me. A few years later I was in Osaka airport and a passenger in the queue was checking in a green coloured Globe-Trotter suitcase. The case looked very sturdy but with beautiful patina and had a few stickers on it. It looked robust and most of the suitcases I used in the past were easily dented or punctured. Later, I saw a Globe-Trotter case available in Hong Kong for the very first time and I finally made my first purchase from Lane Crawford.

Do you own any other Globe-Trotter products?

I owned two Globe-Trotter cases before this commission: a limited-edition Manolo Blahnik Trolley Case and the Safari Ivory Trolley Case. What is the story behind your Super Bespoke case?

I participate in a lot of vintage timepiece events and gatherings around the world. When I saw the special-edition RAF briefcase in the shop I instantly recognised it as a showcase for my collection at these events. The finishing on the RAF case is rather unusual and looks very cool! It stands out from every other carry case I have seen on the market. However, the compartment is a regular briefcase, so I looked for the possibility of a customised insert made by the original Globe-Trotter factory. After a few conversations with the Hong Kong distributor, I was pleasantly surprised that their bespoke service could accommodate my unusual request. How did you find the bespoke experience with Globe-Trotter?

The experience was great. The sample room from Globe-Trotter guided me on the specifications I needed. For example, how many watches I needed to carry in the case; the size of compartments for miscellaneous parts etc. Following the consultation, they provided me with a digital mock-up of the design for my review before the production.

What do you think of the final product?

Although there was a moment of waiting for the production; when I saw the end product for the first time, it was definitely worth the wait. It is truly exquisite.