“James Bond’s attaché case was a weaponised piece of kit””

One of the most famous attaché cases of all time has to be that issued to 007 by Q Branch in Ian Fleming’s 1957 novel From Russia with Love. It made its screen appearance in the film of the same name in 1963, laden with special features: concealed knives, ammunition, a gas canister disguised as a talcum powder tin and a string of gold sovereigns to get our hero out of the tight spots he would inevitably find himself in. There’s something pleasingly witty about pairing this symbol of the British civil service with a very special example of one of Her Majesty’s civil servants – a super-spy for whom this hinged boxy accessory becomes a weaponised piece of kit. The name ‘attaché case’ comes from the fact that it was a bag typically carried by diplomatic personnel ‘attached’ to an embassy, as in a ‘cultural attaché’. ‘Attaché’ is, of course, a French term. The other name for the model – the briefcase – refers to its function of carrying ‘briefs’ for those in the legal profession. Another famous example is that such as case is traditionally held up by the Chancellor of the Exchequer outside number 10 Downing Street on budget day. Pub quiz fact: today’s attaché case is said to be the ancestor of a 14th-century leather messenger’s satchel used to carry valuables that was called a ‘budget’. What we now know as the briefcase developed over the centuries via the hinged carpetbag and Gladstone bag, and apparently took the form we would recognise in the late 1850s.

“In No Time to Die, 007 once again has Globe-Trotter luggage” Interestingly, Globe-Trotter can claim a relationship with both 007 and the Chancellor. Since SkyFall, the Bond franchise has shown a penchant for Globe-Trotters. In the 2012 50th anniversary film, a sniper villain uses the parts of a Globe-Trotter Stabilist case to assemble a rifle in Shanghai. A reproduction of this was made by Globe-Trotter for sale, with a limited edition of 100, featuring a diamond-quilted Alcantara lining and a handle that was a dummy telescopic gun sight. Then in 2015’s Spectre it was Bond who used a Globe-Trotter – a brown Globe-Trotter Original case, readily available to the public – on his trip to Morocco. And now, in his latest outing in No Time to Die, released later this year, 007 once again has Globe-Trotter luggage. This time there is an ocean green Centenary case with black leather straps and trim, as well as a black carbon fibre carry-on trolley case with a central striped strap and black leather reinforced corners. Both come with four wheels, a first for the brand. Bond-watchers will be aware of the Globe-Trotter 007 connection as it is well documented (and the new film’s luggage is already available). But what is less well-known is the firm’s relationship with the Treasury. For this, we need to go back nearly 100 years to 1924. This was when Winston Churchill became Chancellor, a post he held until 1929. And yes, he used a Globe-Trotter briefcase while in office. 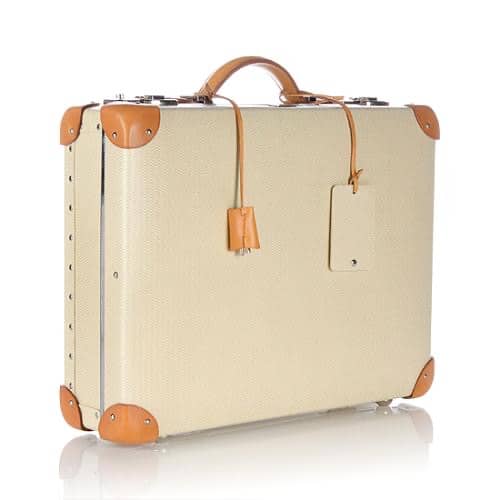 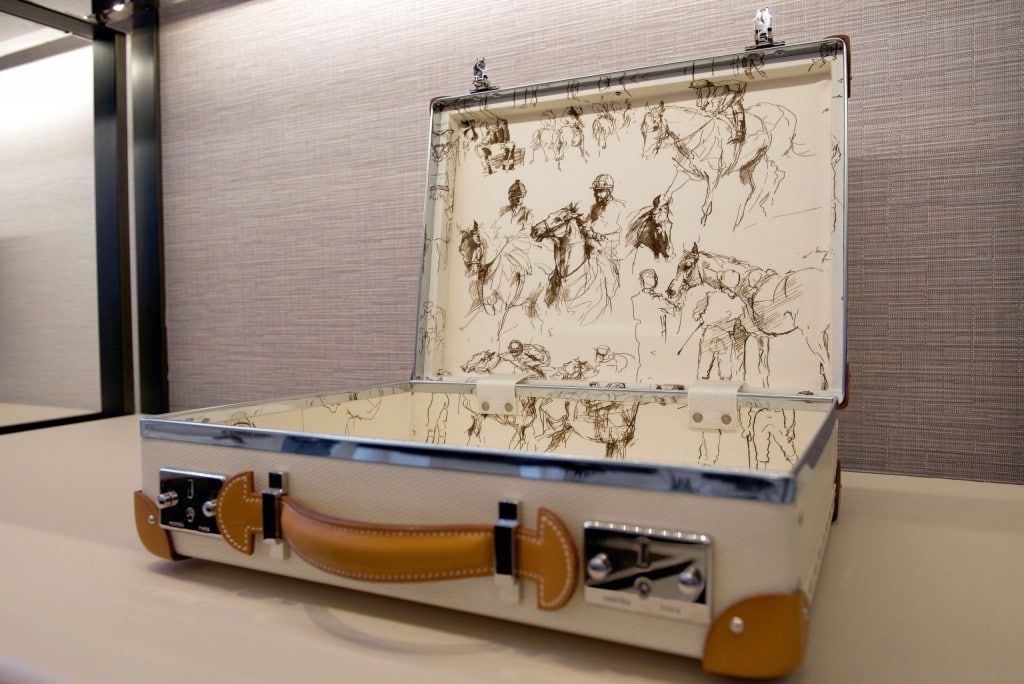 More recently, Globe-Trotter’s slim attaché case has attracted other interested parties. In 2007, luxury goods house Hermès created a version with Globe-Trotter in elegant ivory with light tan leather trim. In reference to the French firm’s equestrian heritage, the lining featured images of horses and riders. Then in 2018, Gucci developed a decorative version with Globe-Trotter featuring a floral motif on the exterior, black leather trim and the Italian house’s signature green-red-green stripe down the sides. 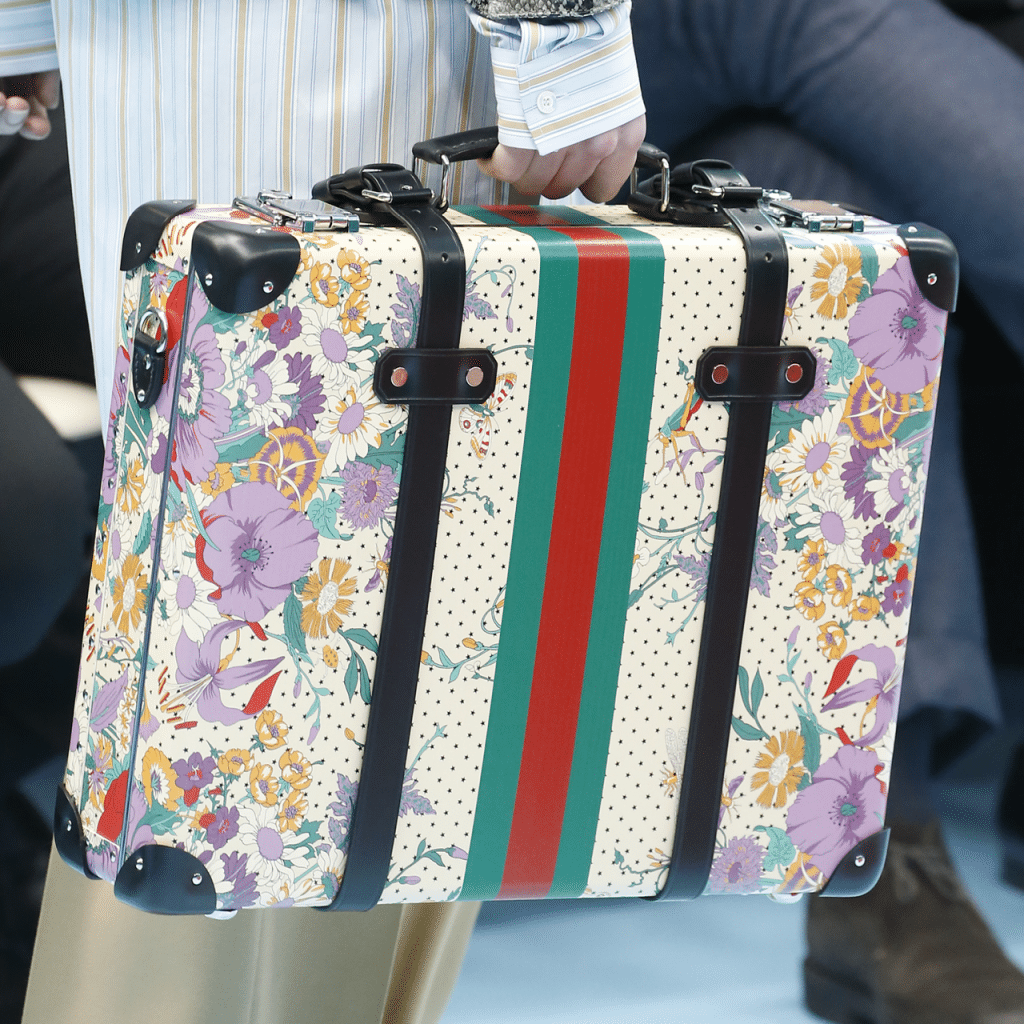 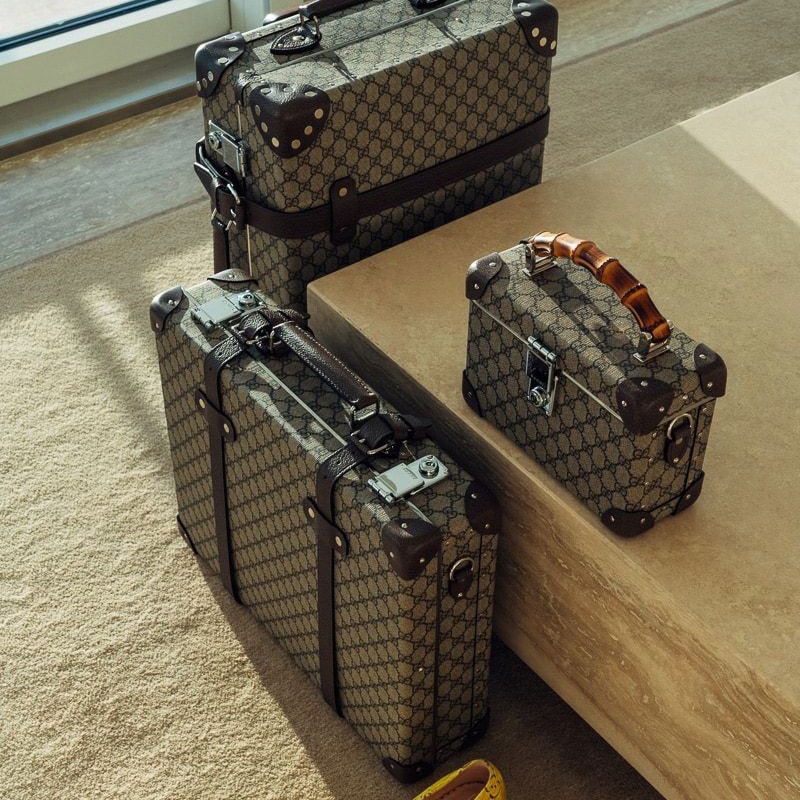 Last year, Paul Smith created a 14” mini attaché case in black with multi-coloured leather corners (red, khaki, green and yellow) and a wide shoulder strap. Finally, this year, Berluti has interpreted the Globe-Trotter slim attaché in its own way by covering it in the label’s brand new signature canvas; this incarnation also has Venezia leather handles and corners that have been hand-painted, a leather strap, and hardware in nickel, engraved with the house logo. The Berluti and Paul Smith models are currently available, as is the Globe-Trotter classic business case, which comes in a number of different colours and different-coloured leather trims. Made from the same vulcanised fibreboard used by the firm to make its luggage, it is lightweight and sturdy, offering protection not only for the A4 documents you might want to carry, but also for all those daily essentials of the modern world such as laptops and electronic devices. The attaché has key-operated locks for security, and the interior is fitted with a detachable leather folio that can hold pens and documents. A pair of metal ‘arms’ stops the lid from closing when it is open. A leather shoulder strap can be added by special order and will be fitted at the Globe-Trotter factory.

Read more
the art of adventure

The Perfect Gift: A Personalised Globe-Trotter Case In Special Colours